The upper secondary school in the world with most Nobel Prize winners is… Ulstein Vgs?

Edvard Moser is a Norwegian psychologist, neuroscientist, and head of department of the Kavli Institute for Systems Neuroscience and Centre for Neural Computation at the Norwegian University of Science and Technology (NTNU) in Trondheim.

Edvard and his wife May-Britt Moser received the Nobel Prize in Physiology or Medicine together with the American-British scientist John O´Keefe. Edvard and May-Britt discovered glitter cells in the brain, which explains how animals and humans can orient themselves in a room. They got the prize in 2014.

Both Edvard and May-Britt Moser were students at our school, back in 1978. They graduated from Ulstein Vgs in 1981. Edvard and May-Britt first studied psychology at the University in Oslo. He also took the doctor degree there, and then he was appointed professor in neuroscience at NTNU in Trondheim in 1998. 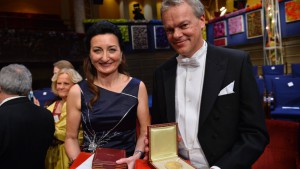 The Nobel Prize winners in Medicine 2014, Edvard and May-Britt Moser, have both been students at Ulstein VGS. The 16th of December Edvard Moser visited our school, 34 years after he graduated.

He arrived the school at 12:30, and left around 15:30. An outstanding applause met Moser when he entered the school. Everyone at school, students, teacher and others were gathered in Atriet. In addition, the teachers he had 34 years ago, were present. First, he gave a speech to the students and gave us advice for the future, “Do something you find interesting”. Then he had lunch, and talked to the teachers.

What shoes does a Nobel Prize winner wear? The answer this time is red Converse.