It is almost two years now since the refugee crisis became a fixture on newspaper front pages. The largest mass movement of people across European soil since the end of the Second World War.

Families have been uprooted from the communities in Syria, Iraq and Afghanistan seeking asylum in the West to the European countries which have been asked to accommodate the waves of humanity breaking on their doorsteps, seeking a life away from the howl of war.

But Greece is that has arguably been the most affected. As the most south-easterly corner of the European Union, it has found itself cast as the gateway to a humanitarian disaster, witnessing the regular arrival of boats of desperate passengers, each risking everything on the short but dangerous passage across the Aegean Sea – from the Turkish shore to the supposedly safe havens which lie within visible range.

According to the United Nations High Commissioner for Refugees (UNHCR), 1,000,573 refugees and migrants arrived in Europe from the Middle East and North Africa during 2015. Of these, some 850,000 landed on the Greek islands. Of these, 49 per cent were Syrian, 21 per cent Afghan and eight per cent Iraqi. Since the start of this year, more than 160,000 people have made the leap from Turkey to Europe, with the majority – 122,637 – entering the EU via Greece. 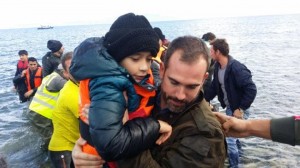 It is the islands closest to Turkey – notably in the Dodecanese archipelago, but also large outcrops such as Chios, Samos and Lesvos – which have been most closely touched by the situation. The Foreign and Commonwealth Office (FCO) names Lesvos, Kos and Samos as being particularly affected – but also underlines that “there are no reports of any specific risks to tourist visiting these islands or at border crossing points.”

The Greek National Tourism Organisation (GNTO) describes the Dodecanese as “a haven of crystal clear waters, sandy or pebbly beaches, important archaeological finds, imposing Byzantine and medieval monuments and traditional settlements”, and stresses that the situation will not affect tourists seeking a Greek holiday this summer.