On Tuesday we had to be in school a little bit earlier, because we went to Brussels. The drive there was quite long because of the traffic, but that’s normal for Belgium. First we had to go through the check point and then we could viste the Parliamentarium. We put our bags and jackets into the lockers and then we went on a tour. When we ended our tour we had lunch and then we continued our journey in the European Parliament. We had to go through the check point again. Other countries had a guided tour of the Parliament but some of our schoolmates were to young, so we met Slovenian member of the Parliament, Mr Bogovič, and he and his assistant took us on a special private tour. After the tour we went to the Microsoft center. We saw a lot of new technology there. And we could even try it. We saw virtual glasses, hologram glasses, smart TV-s and other devices. Then we went back to Sint-Niklaas 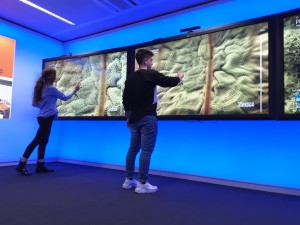